Resumé of the Nine Dragon Heads Symposium 3PAW in Biel/Bienne

The Nine Dragon Heads Symposium 3PAW (11th to 23rd october 2011) was the first  international environment art symposium of its kind in Switzerland. susanne muller (artist), Daniela de Maddalena (artist) and Annelise Zwez (art critic)  all experienced Nine Dragon Heads  have organised it on the spot, in virtual contact with Park Byoung Uk  Head of the Heads.

The Symposium was characterised by two major parameters. First, it took place in a dynamic town of about 50 000 inhabitants (which is  for small Switzerland quite a lot) and second in direct contact with the lake of Biel/Bienne, the 5000 year old history of settlement in the area and its  huge vineyards along the not very high chain of mountains called Jura. 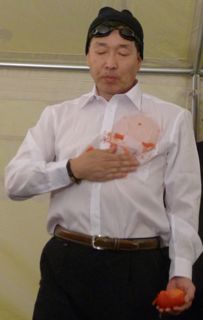 An urban environment allowed the Symposium to have lively contact with the population, the local art scene and art students. The traditional focus of the Nine Dragon Heads Symposia on performance allowed many cultural exchanges beyond words.

The event began already on the first evening with a Vernissage at Art-Etage, where the 25 artists showed small works that introduced them to the Symposium community. The Mayor of Biel/Bienne welcomed the Nine Dragon Heads from all 5 continents and Park Byoung Uk expressed his gratitude of being invited to Switzerland. Background information and three performances combined the production of visual works and moving artistic action.

To take a bicycle to get from one end of a town to the other in Switzerland is nothing extraordinary, but nevertheless part of an conscious ecological position. So the local Symposium organisers looked for a sponsor, providing all artists with a bike. For some artists this was an exceptional proposition as biking is not common all over the world. But just for this reason the  two wheel-vehicles became one of the labels of 3PAW.

The artists used the bikes to circulate through town; for instance to find the irritating thing they wanted to show at the Off-Space  Lokal-int., which was planned as the meeting point with the local art scene. Although the english language was not sufficiently familiar to everybody, the moderated evening-discussions on found objects and spontaneous performances were intensif and enlarged also the muitutal understanding among the 25 Nine Dragon Heads present in Biel/Bienne. 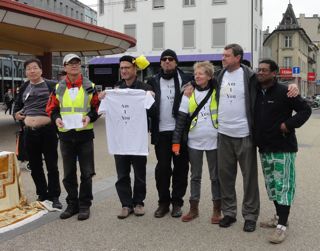 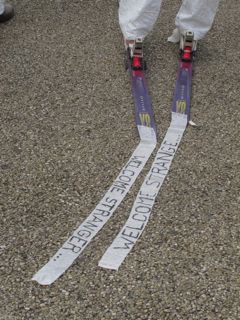 The performance events at Zentralplatz were challenging and successful for artists and public alike. It was Saturday which in Switzerland means, that a lot of people are out shopping. The success was on one hand public interest and the discussions that took place, but as much the good and inspiring atmosphere that motivated the artists to enlarge, to double, to intensify their performances. 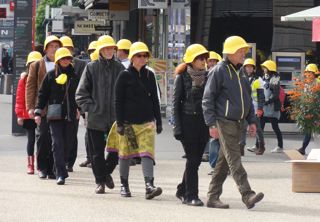 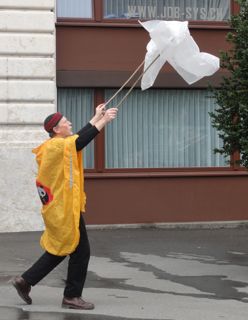 The circle  in some way  was realised by the Swiss artist Bernhard Gerber who made all participants wear a yellow helmet  (from the Swiss civil security organisation) and led them meandering around Zentralplatz in a long line from one end to the other and back. There was music (Phil Dadson, Max Bühlmann), dance (Yoko Kajio), words:  Am I you? (Iliko Zautasvili). There was public reading (Gordana Andjelic), traffic deviation (Daniela de Maddalena), a  third eye (susanne muller), a folkloristic intervention (Jessy Rahman), dry skiing (Paul Dunker Duyvis), a flea market (Bruce Allan). There were soap bubbles (Pang Hyo-Sung), yellow flowers (Yoo Joung Hye) and piegons picking bread-letters (Enrique Munoz/susanne muller). Whereas Gabriel Adams offered guests tasters of the production of his  Ice Cream Machine. 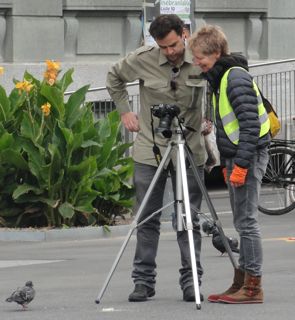 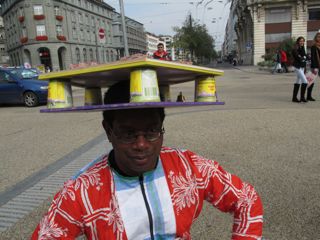 The Symposium was not a show. An important aspect was personal research undertaken by the artists in town and at the nearby lake surroundings, each artist assuming his/her own focus. The results peaked in the final presentation, which is called  artist to artist at every Nine Dragon Heads Symposium, wherever in the world it takes place. But more of this later. 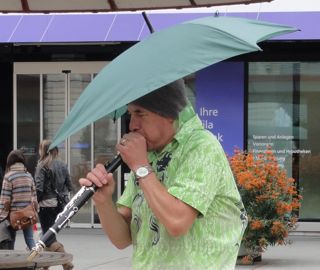 To support contextual research and understanding, the Symposium included visits in different ateliers of local artists or actual artists in residence (Fredie Beckmans, Daniela de Maddalena, susanne muller and more) a guided walk through Biel/Bienne with the  townhiker Benedikt Loderer, music presentations (Suzanne Castelberg), the viewing of the documentary film on the two land art projects  Viniterra/Vocis terra by Ulrich Studer, a tour to Switzerlands Capital Berne, in the Alps, the beautiful town of Lucerne (Ursula Stalder) and of course good discussions with guests in nice restaurants. 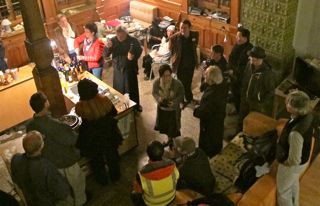 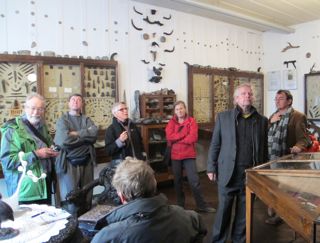 An excursion led to the headquarters of research currently being made on the lake dwellers who lived 5000 years ago at the coast of Lake Biel/Bienne, then to the famous Ile of St. Peter, where Jean Jacques Rousseau spent  the happiest time of his life in 1765. From the Ile the ship  MS Bielersee brought the group to Twann  one of the famous winemaking villages along the nothern coast of the lake, where a visit to the ancient  Fraubrunnenhaus (16th century) with its lake dweller museum was also on the programme as was the visit to an adjacent wine cellar.

A workshop organised at the School for Graphic Design of the District in Biel/Bienne between NDH artists and students proved a good experience. After presentations from both sides, groups consisting of one Nine Dragon Head and two students combined to realise one minute films that were shown afterwards on screens arranged in a circle. Astonishing what was possible in so short a time! 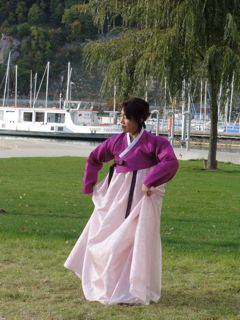 A concluding highlight was the presentation  Artist to Artist on the last day at Biel/Bienne. During the whole period of the symposium the Lido area of the town (closed at this time year) directly at the edge of the lake and close to Lago Lodge  the headquarters of the Symposium – was reserved for 3PAW; a title that irritated people and artists in the same way, but Park Byoung Uk meant with it just the enigma of art, where 3 paws are as normal as 2 or 4. 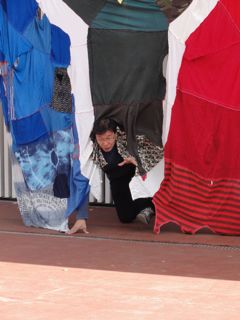 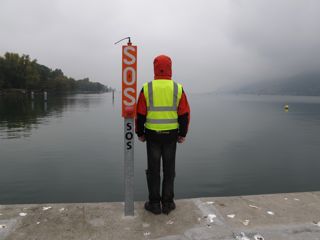 At the lake artists could realise sculptural or land art works throughout their time at Biel/Bienne. And  as the final presentation showed clearly  they used the possibility! Diek Grobler and Marinda du Toit presented their  Vlaglied, Yoko Kajio animated the public to show their skill in a game, Pang Hyo-Sung transformed himself into  rubbish, Bruce Allan read his 3PAW-Stories, Park Byoung Uk marked characteristic signs like SOS, Christoph Doucet depicted with an upright standing canoe in front of a tree in the back light of the afternoon the beauty of the spot. Inbok Trobos brought in her dance performance the Korean background of the Symposium into evidence, whereas Gabriel shortened the distance between Venice and Biel/Bienne with the offer of canoe-trips. A complete list would be longer… 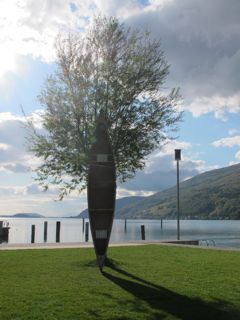 Brought together: The Nine Dragon Heads-Symposium in Biel/Bienne was an event and a success that will live on in the individual works of all artists and in this way go round the world. 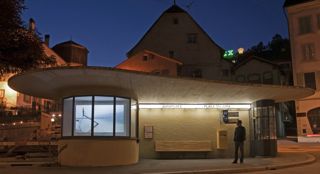 The Symposium continued in films in the Off-Space  Juraplatz (Enrique Munoz).